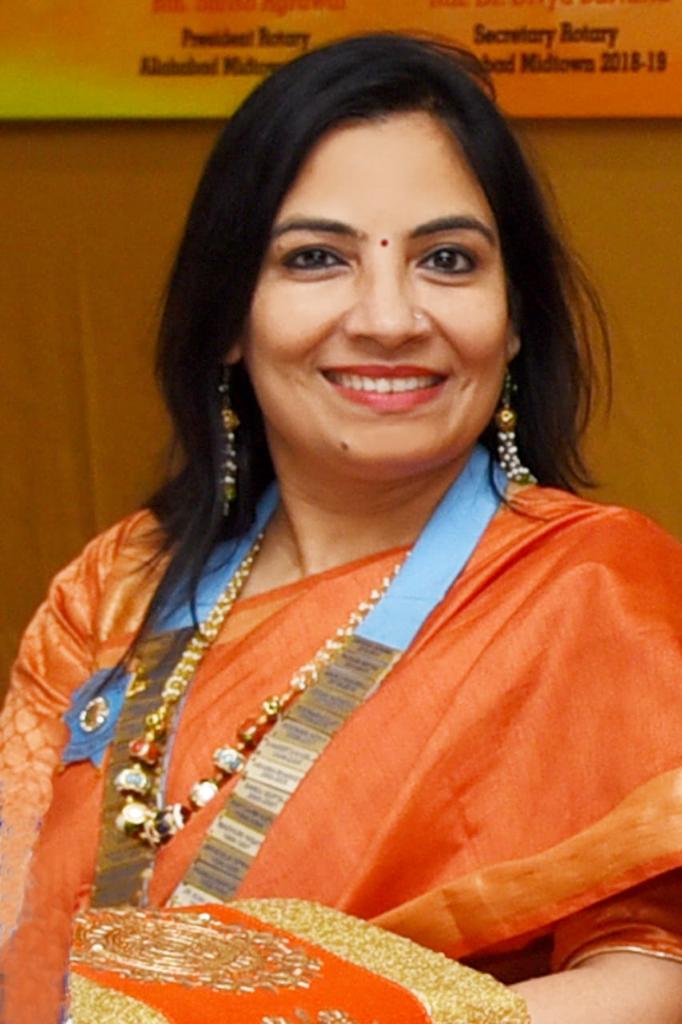 This year she is an advisor to the plastics garbage and e-waste management committee. 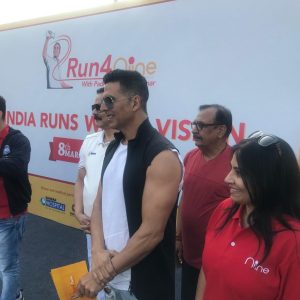 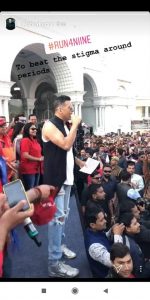 She is Vibrant and vivacious, yet a simple person who believes that successful people do not do different things, but they do things differently. Born on 9th December, a true Sagittarian, Shalini Talwar exemplifies generosity, intellectuality, leadership, and is full of life. She grew up in a strong cultural Agarwal family of Allahabad. She did her B.Sc. and L.T from Allahabad University. Her leadership qualities right from school days helped her to outshine in whatever she did. She was the Head Girl of her school as well as the Student Union President of the L.T. College.

She joined the Inner Wheel Club of Allahabad Midtown in 2003 and her passion to serve mankind got her recognized as the Best President, Best Secretary & Best Treasurer. She has sponsored the First New Generation Club of India, ”IWC Allahabad Navya ” when She was the club President in 2008-09. As District ISO in 2012, she organized ‘Navshakti’- MultiDistrict ISO Meet for the first time in her District. As a District Editor, she managed to collect the maximum sum of money for the district till date. She was appreciated by the Association Treasurer for sending maximum district dues first to the Association as a District Treasurer. She was the chairman of competitions held at Multi-District Rally in Lucknow in 2016-17, where she also released a book, “Chefs @ Inner Wheel” by compiling the recipes sent by members of all the Districts. She left no stone unturned in fulfilling her duties in Inner
Wheel District. During her tenure as District Chairman, ‘Rainbow Village’ was the Signature Project. 26
Schools were declared as Happy Schools. North Zone Meet, Inner Wheel Crossing, Inner Wheel Vocational Centre in Jail, Inner Wheel Cooking Class for blind children were some grand achievements of her tenure. She attended the Triennial at Varanasi, Kolkata, and Pune as a Voting delegate. She is happily married to PP PHF Rtn. Ravi Talwar, who is in the pharmaceutical business.
Shalini is blessed with two children. Elder daughter Akshita is a Film and Video Designer in Mumbai and her younger son is pursuing C.A. Both are down to earth and are brought up with high moral values.
Interested in creative works, she runs a boutique “Sharvi”.

She firmly believes that we, as human beings, are put on Earth with a beautiful purpose to make it a better place. Be positive in life, Think big, Do good and leave the rest on
Almighty.

Further, PDC Meet – SHRADDHEYA
A unique program of PDC & Past President Meet Shraddheya was hosted by IWC Lucknow on 6th January 2019. Our very talented & energetic Past District Chairmen actively participated in the fancy dress competition and gave awesome performances. They were felicitated for their constant help and support. Competitions like Group dance, Skit, Slogan on IIW theme, Inner Wheel Day Card, Handmade Candles were held for the Past Presidents and members.
On International Women’s Day- RUN FOR NIINE, To commemorate International Women’s Day on 8th March, All the Clubs of Inner Wheel District 312 participated in their cities in the mega event which was organized by Pan India in over 400 different cities aiming to get people to talk about periods and create awareness of menstrual hygiene.
Super Star Akshay Kumar, brand ambassador for Niine flagged off the run, in Lucknow which was followed by awareness Talk, a felicitation program for brave and empowered women who have faced abuse in their lives and chose to fight back.

Excursion and Friendship Exchange Program: The trip to Nepal on 31st March 2019 was an incredible experience.
We had a comfortable stay at Tiger Resorts with sumptuous food, full entertainment in the in-house Casino.
The Wonderful exchange program between IW Nepal Dist 350 & IW India
Dist. 312 on 1st April 2019 was heartwarming. The 16 members who were a part of this delegation received a warm welcome from IW Lumbini. Kaada, a welcome scarf was exchanged & Gifts as tokens of love were given to each other.

District Award Function- SHRI KIRTI
It was organized on 6th June’2019 at Varanasi hosted by IWC Varanasi Central. All the Clubs & officers were recognized with trophies & certificates for their hard work done throughout the year. PDC Poonam Gulati & PDC Sangeeta Khosla conducted the whole program in a very beautiful manner.

Intercity Meets 1st Intercity Meet – SHRIJITA, The wonderful combination of women’s power and talent was very evident in the 1st intercity meet ‘Shrijita’ held on 8th July 2018 hosted by IWC Lucknow Prerna. The meaningful meet was based on the IIW theme ‘Empower & Evolve’ in which panel discussion on women empowerment with eminent ladies from different fields was efficiently conducted by program convener PDC Alka Bansal. Second Intercity Meet – SHRI DIYA. It was hosted by IWC Maunath Bhanjan on 10th Nov. 2018 at Mau. Chief guest PAP Nandini Bhargava greeted everyone with warm festive wishes & praised the commendable work of the district. Various dances and fancy dresses added liveliness to the event.

District Projects
R.A.I.N.B.O.W.
Their District 312’s Signature Project – Rainbow (2018-19 ) is the District Chairman’s thrust area which is classified as:
R – Redesign your Village: Many clubs have adopted a village or locality and are trying to change the basic structure as per their ideas. They worked on cleanliness, electricity, schools, toilets, etc., and are trying to make it digital. All Clubs of Allahabad had worked hard and made a beautiful rainbow village in the Arail area, Allahabad, providing all amenities for the residents.
A – Aadhar Shila: Keeping in mind the IIW social project ‘caring for women and girls’ many seminars on ‘Good Touch – Bad Touch’ was organized. Self-defense classes and knowledge about women Power Line 1090 have been given. Many Sanitary Pad Vending Machines have been installed at schools, Colleges, Railway Stations, Villages for their menstrual hygiene.
I – I am Stree Shakti: Clubs have worked extensively on women empowerment. 26 Vocational Centers are being run. Clubs are focusing on selling the products made by them to make them self-dependent. Awareness of many government Schemes like LIC, Ujjawala Gas Scheme has been given to them. Inner Wheel Beauty Parlour and Inner Wheel Grahasti store were opened to empower girls. Vocational Center in Jail run by IWC Barabanki & Lucknow Prerna jointly & IWC Balrampur touched my heart.
N – Nav Jagriti: Education is the biggest boon to uplift society. Almost all the clubs had adopted a School in remote areas and they are doing commendable work there. 23 Happy Schools were made and 10 are in process. 21 Adult education Centers are running successfully. Computer classes were also provided in many schools to teach modern means of education.
B – Branding of Inner Wheel: Clubs have put up hoardings with Inner Wheel name & Logo at the entrance of the cities, Railway Stations, Post Offices, Petrol Pumps, Hospitals with important messages. Their projects have been widely covered in print and electronic media. Jute bags, Coffee Mugs, School bags with

Inner Wheel Logo has been widely distributed amongst people. Inner Wheel Crossing by all the IW Clubs of Varanasi, Inner Wheel Beauty Parlour by IW Lucknow & Lucknow Prerna, Inner Wheel Schools by IW Allahabad & Raibareli, Inner Wheel Bazaar by IW Allahabad Midtown, Inner Wheel Park by Lakhimpur Navdisha are some appreciable branding projects of the Club. The inauguration of Rainbow Village by all IW Clubs of Allahabad was done at Conference by AP Smita Pingale. Blood Donation camps have been organized in collaboration with hospitals to make the presence of IW felt in society.

O – Our Earth Our Future: Many clubs have placed orders to prepare paper, cloth & jute bags with needy girls or vocational centers and then they buy those bags to make them earn their living and distribute those bags amongst shopkeepers. Tree Plantation and anti Polythene drive have been the major focus of almost all the clubs. Seminars, rallies, drawing competitions, skits were organized by various clubs. Rainwater harvesting has also been taken up by clubs. Talks on Cleanliness and providing dustbins to schools & public places were thrust areas. Making manure from waste vegetables and flowers was a unique project of some clubs.

W – We Care: Care of senior citizens, cancer patients, teachers, leprosy patients & animals has been done by most of the clubs. Special care of special children by many clubs is commendable. Clubs organized picnics, Movie shows at PVR, and celebrated birthdays with old people.
16.Visit of Association officers during the year:

At District Chairman’s Installation: Association Vice President Mamta Gupta
Association Functions hosted during the year:
North Zone Meet – Empower to Evolve
It was a grand affair hosted by District 312 on 18th-19th August at A.M.A Hall at Allahabad. Members of D301, D307, D308, D310, D311, and D312 enthusiastically participated, along with the national dignitaries.

The whole program was designed interactively and effectively which started from Pre-arrival dinner, “Savan ka Sindhara” to a massive closing ceremony, “Saptrang”. It included various other events like Pop Up Shop (IW Bazaar), Inner Wheel Chef, projects in Rainbow village, the inaugural session on the theme 100 years of Indian Cinema, Clean Ganga Rally, chat show with Gen Next which were appreciated by all.