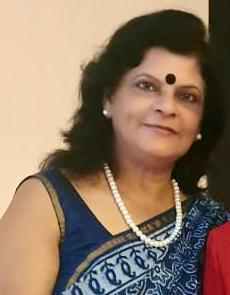 Brief introduction of her:-

Dr. Rita Jha was born in Bombay ( Mumbai ) and brought up in a disciplined, albeit loving, and caring environment with her father, Late commander S. N. Jha being an officer in the Indian Navy and mother, a homemaker. She completed graduation in zoology (Hons) from St. Joseph’s College for Women, Vizag with distinction and was the president in the final year of college. She has always enjoyed a loving relationship with her family and has been drawn to contribute to social causes. She does not shy away from a challenge and believes in putting her best foot forward with a well-reasoned approach. She is an avid reader and demonstrates compassion in all walks of life. After getting married in 1981 she shifted to Patna where she continued her pursuit for further knowledge. She completed her M.Sc from Science College, Patna University getting a gold medal and surpassing all previous records. Later, she completed her Ph.D., B.Ed and M.Ed. Apart from academics, she has a great passion for sports, which she believes contributes to better physical and mental health, discipline, focus and has the ability to bring people together. She represented her school in long jump events at National junior games in 1975 and 1976. She strongly believes that teamwork is an essential ingredient to achieve common goals. She captained a volleyball team at the interschool level and represented Andhra University in basketball in 1978 and 1979. Being actively involved in academics and sports has aided her to have a well-rounded personality. She moved to Jamshedpur in 1985 with her husband, Past President, and PHF late Rotarian Shekhar Jha from the Rotary Club of Jamshedpur West. Since moving to Jamshedpur, she has been in the teaching profession for the last 36 years. She has also been involved in, planned, and implemented several programs for social causes and upliftment of the lesser privileged. She has also been doing yoga for the past 25 years which she believes helps her to maintain a sense of balance in her life. She considers it an honor, privilege and is grateful for having the health, support, and opportunities in life. This further strengthens her determination to help and assist others reach better livelihoods. She believes in the strength of community and that together, we have the power to make positive differences in the lives of people, be it in the short term or for generations.

Her Inner Wheel Journey – She joined the Inner Wheel Club of Jamshedpur as a charter member in 1996 and since then has been enthusiastically involved in Inner Wheel activities. Due to her hard work and sincerity, she was bestowed with awards at club level for Best ISO, Best Treasurer, Best secretary, Best vice-President, and Efficient President from IW District -325. During her tenure as the President (2015-2016) of IWC of Jamshedpur, the club was awarded the ‘Best Club’ award in the District. As a CGR she was awarded the Efficient CGR in 2016-2017. In 2017-2018 she was elected as the District Editor of IW District -325. During her tenure as District Editor, she made six ebulletins, focusing on the projects and events in the district. And a souvenir was published by her for the 33rd District Conference. She also conducted a competition among club editors for the cover page of a newsletter. As Dist ISO ( 2018-2019 ), she floated several competitions for the Club ISOs, and prizes were given. At the Inter-District level two competitions were organized – Slogan writing( Topic – Empower & Evolve ), for which she compiled all the slogans into a small booklet and gifted it to the then AP Smita Pingale, all the District EC members, and PDC’s of the District -325. Another was a photography competition – ‘Ye hai India meri jaan ‘. Out of box photographs were judged and prizes were given for both competitions. In 2019-2020 she was the District Treasurer and worked methodically and meticulously under the able guidance of Association Treasurer Late Rachna Agarwal. Currently, she is a District Secretary and performs her duties methodically. At the National / international level, she has attended two triennials ( Hyderabad-2013 & Kolkata-2016), AP installation “Oneness” in Kolkata in 2015-2016, AP installation “Pravah” in 2016 at Ranchi, East Zone Function in Guwahati -2019, Virtual IIW Convention -2021. At the District level, she has attended 10 Dist. Assemblies, 10 District Conferences, 9 District rallies and 8 Intercity meets.

Love for Inner Wheel – Rita’s motto in life is –” Make each day count “. Inner Wheel is the largest international women’s organization. And it provides a great platform to help the needy, implement projects, and create awareness regarding literacy, the importance of breastfeeding, immunization for children, Personal hygiene, management of e-waste, eco-friendly environment, water harvesting, and water management, use of solar energy. She is blessed with a daughter Aarti, son-in-law Shreyans, and son Avneet. Aarti is a yoga instructor and lives in Chicago with her husband and two sons – Sparsh & Athrav. Avneet is a law graduate working with a law firm in Gurugram. Apart from playing golf, her hobbies include reading, listening to music, and trying out new recipes.
She recently lost her husband but believes that he is blessing the family every single day from wherever he is. Life has to go on with meaning …”MAKING EACH DAY COUNT”.