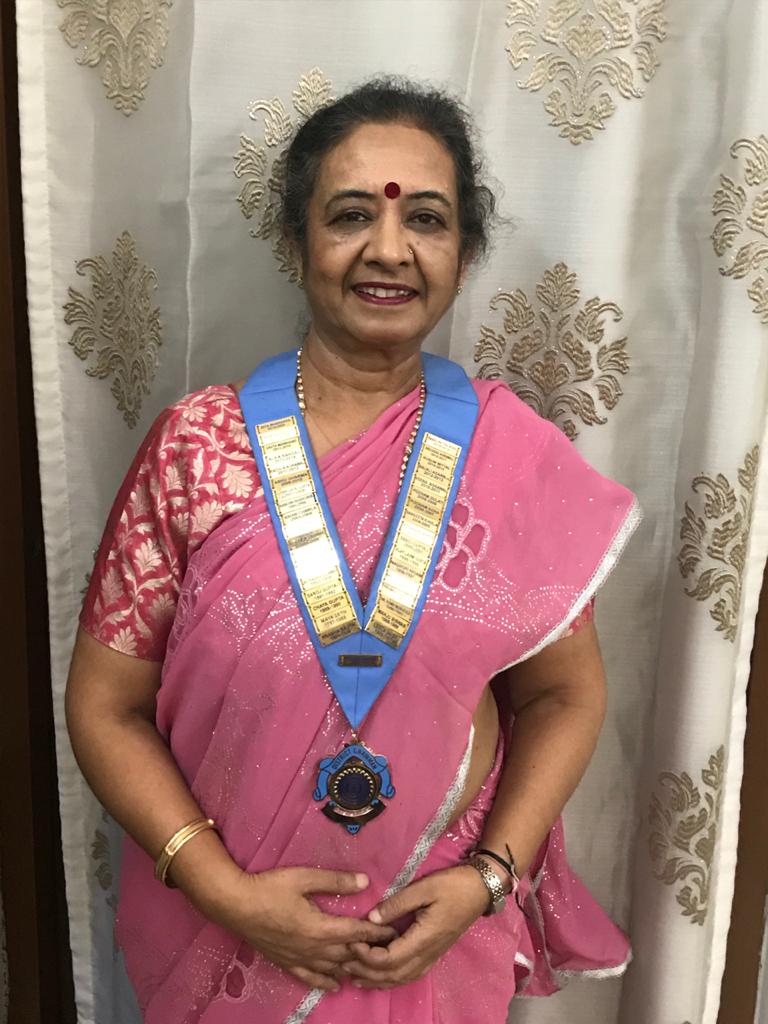 Mrs. Rita Bhargava, daughter of Dr. K.C. Bhargava, TB and Chest Specialist, was born and brought up in Himachal Pradesh and now well-settled in Lucknow. She did her B.Sc from Himachal University and B.Ed from Kurukshetra University.
She is a globe-trotter and has an immense interest in alternative healing techniques. She is a Grand Reiki Master, Karuna Reiki Master, Pranic Healer, Acupressure/Acupuncture therapist, and a Vipassana meditator. She joined IWC Lucknow West in 1996 as Charter Club ISO, served thrice as Club President, organized programs on health and hygiene, the environment, Vipassana meditation orientation program, and women empowerment in Lucknow Jail. Orientation and awareness program on Thalassemia in collaboration with the Doctors of SGPGI Lucknow. While serving as Dist. Editor, she had two publications; Dist. Directory “Alankrita” and Distt. Souvenir “Amritash”, as Dist. Treasurer. She was instrumental in obtaining PAN for Dist.312, and as Dist. ESO she formed seven new clubs.” Served as District Chairman-312 in the IW year 2019-20. Now serving Association of Innerwheel Clubs in India as Honorary Association Treasurer for the year 2020-21 and Association Council Member of District 312.

She attended the IIW convention in Istanbul (Turkey) and virtual 18 IIW Convention 2021 held in India, and four Triennial Conferences in Varanasi, Hyderabad, Kolkata, and Pune.
She is a recipient of several awards from NGOs in recognition of her social work and is a patron of a social organization, Lucknow Bhargava Mahila Sabha & Past National Treasurer of Rashtriya Bhargava Mahila Sabha. She was awarded MAA SAVITRI BAI PHULE AWARD AND APPRECIATION LETTER FOR MERITORIOUS SERVICES TOWARDS “ BETI BACHAO BETI PADHAO” consecutively for the years 2016 and 2017. As a sports enthusiast, she managed National and State U.P.Fencing and Judo girls’ teams in State and National Tournaments. Rita is married to Past Assistant Governor RTN. CA. S.K.Bhargava District 3120. She has two married well-settled daughters, CA Supreeta Bhargava married to Mr. Mohit Bhargava Senior Director in MNC Johnson & Johnson, and Mrs. Tanushree Bhargava who is working as Institutional Development consultant for Afghanistan for the Ministry of Justice, Supreme Court Office of Prison Administration and Ministry of Women’s Affairs married to Mr.Collin Vause, a Lawmaker who worked with Govt. of Afghanistan. Both the daughters are Black Belt in Judo. Both played in the national team of Judo, Swimming, and Fencing. Tanushree is also a Kathak exponent and stage performer.

Meanwhile, As a District Chairman, Rita gave her Goal to the District to work upon as a Wish:- as Wish is Vision, Wish is Dream, Wish is an Idea, Wish us a Change, Wish is Commitment, Wish is Dedication, Wish is happiness, Wish is Smile, Wish is Love, Wish is Service, Wish is Sacrifice. Which implies She strongly acknowledges and assists Women’s Empowerment and seeking Vocational training, skill development, self-defense training, Awareness of good touch, and bad touch, sanitation, Legal right awareness, Banking awareness, computer awareness. She understands Inner Wheel branding should be committed appropriately. Along with procuring Service to the Community instance as donated Sanitary pads vending machines similarly on Health conditions whether physical mental and social well-being.

She has operated as incredibly compelling and attained numerous projects and contributed the services to society, and will continue fulfilling her commitments.