Picture of Service project during pandemic. 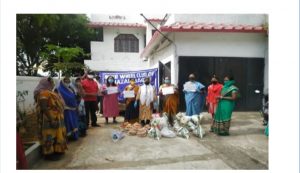 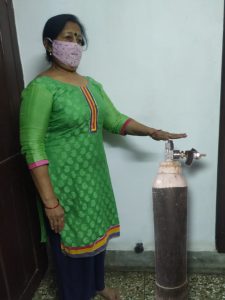 In our Inner wheel Social entrepreneur series in this episode we are introducing you a very dynamic and and popular social entrepreneur of IWC who firmly believes in Social service and charity work yes we are talking about Ela Kumar President of Inner Wheel Club of Hazaribagh, Dist-325 stepped in with precautions to support Covid affected in this lockdown.

IW District 325 was formed on 19th June 1985 with four clubs Darbhanga, Biharsharif, Hazaribagh, and Gaya. It was formed due to the efforts of the first District Governor of RI District 325, Late PDG Dhanesh Prasad. The first club of their District was the Inner Wheel Club of Darbhanga, followed by Biharsharif and Hazaribagh. Now the quantities have expanded and include patliputra, Patna, phulwarisharif, Satya danapur, saumya, Jamshedpur, Muzaffarpur, and others.

Mumbai: Inner Wheel Club of Hazaribagh is reaching forward and carrying supportive projects amid a pandemic

On 21st September 2020, she organized an examination camp of Covid 19 under the joint support of her Innerwheel club and Aisect University. She got her Covid 19 checked with the aisect professor and staff. The students and general public were examined at the camp for covid19. A total of 90 people were assessed in the camp.

ARSENIC ALBUM _30, Free distribution of medicine. – Able to prevent the effect of the corona. It has also been accepted by the Ministry of AYUSH. She met Dr. Birendra Kumar of the well-known homeopathy and administered the homeopathy medicine Arsenic Album-30 to 50-60 people of the village and also gave them free of cost. Its consumption reduces the risk of coronavirus. It should be eaten before the disease occurs so that it increases immunity to prevent the disease, significantly reducing the risk of getting infected.

This club in collaboration with the medical team of Sadar Hospital conducted a Covid-19 test between children and teachers at the high school Hupad. Sahiya Sushil Devi, Auganbadi Sevika Kajal Kumari, Mukhia Sarita Devi, Principal Ruvi Varma, and Teacher Shri Dhirendra Kumar Ji contributed significantly in this process. After the test, She distributed 20 pieces of masks among them.

Members of The Inner Wheel Club of Hazaribagh together distributed food grains to the poor during the Corona period. The President of this Club distributed masks at Sabzi Mandi to protect against corona. They put up the banners to explain precautions to the people.

During the Corona period, when oxygen problems occurred in the city, they helped with the oxygen cylinder, kept in their house distributed one by one to the needy.

To prevent this epidemic, they took the vaccine before the people of Peto village themselves to motivate them to get the vaccine.