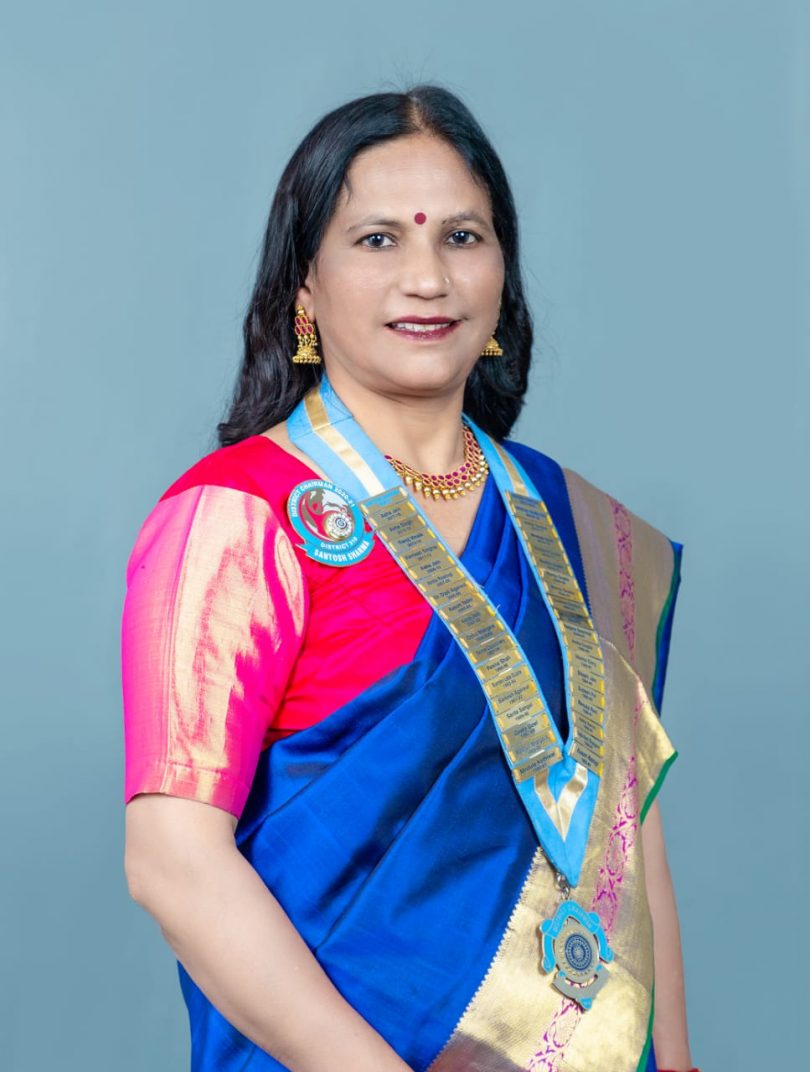 Santosh Sharma, daughter of Late Shri Ram Babu Sharma, born on 4th October, in a renowned family of Rishikesh. Did her B.A. from HNB Garhwal University. Married to Dr Ashok Sharma, a general and laparoscopic surgeon working in Muzaffarnagar. They have a son, Dr Abhimanyu Sharma who is a Histopathologist.
Mrs Santosh Sharma is currently MD of Urmila hospital, Muzaffarnagar. She has been associated with Inner Wheel club since 2007. At club level, she has worked at various positions including Secretary, voting delegate and President. At District level, she has worked as Editor, I.S.O., Treasurer, Secretary and Vice- Chairman. She has been awarded as best secretary, Diamond President and her club was awarded the Diamond club award.
She has been an active social worker and her works include organizing various activities for charity. She has been awarded by various organizations for her service to the society:
Actively working with various organizations for education of the girl child under the banner ‘Beti padhao Beti bachao’
Awarded appreciation letter by Honorable Governor of UP, Smt Anandiben Patel for Inner wheel club’s work under the National Tuberculosis control Programme
Helping victims of Uttarakhand tragedy during 2013 to distribute medicines and other relief material by collaborating with other organizations such as Goonj.
She has been awarded the ‘Nari Shakti Ratna Samman’ and ‘Woman of Community service’ by the NGO Prayatna for her activities in the field of social work.
Actively working with ‘The International Goodwill society of India’ for various social causes.
Involved in women empowerment which includes closely working with Govt agencies for bringing up a Women’s police post at Mahaveer chowk, Muzaffarnagar with funds being provided by Inner wheel club.
Awarded the ‘Adarsh Mahila Puraskar-2016’ by Women’s wing of the Humanities welfare society, Uttar Pradesh.
Awarded the ‘Shanti Ratna Samman’ by Rashtriya Acharyakul Adhiveshan in 2018.
Organizing Diwali mela for fundraising for community service activities of the club.
Providing education to under-privileged students by collaborating with NGOs like Sanjeevani foundation.
Organizing medical check-up camps.
Working with ‘Apna Ghar’, an organization working for upliftment of destitute and divyang citizens.
Attended Triennial conferences at Varanasi and Hyderabad.
Attended President installation in 2017-18 and 2018-19.
Attended zonal meets at Lucknow and Varanasi along with Multi-district rally at Amritsar.