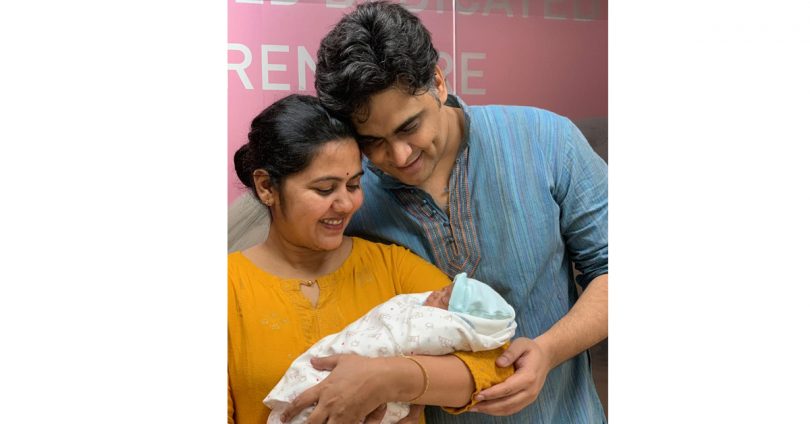 Motherhood hospital, managed a high-risk pregnancy successfully, where doctors removed a dead fetus from the womb and continued with conservative management to save the second twin. Continuation of pregnancy after one twin is delivered or aborted is very rare. The occurrence rate of asynchronous delivery is 0.14 per 1000 births. The longest inter twin delivery interval reported worldwide is 111 days.

36-year-old Mrs. Priti Iyer, had a history of 3 failed attempts and she conceived Dichorionic (fraternal) Twins spontaneously. At 13 weeks 5 days gestation, her cervix started opening from inside. Hence, a stitch was placed in the cervix to help it to stay closed and was kept on medication and bed rest. This stitch became loose and had to be reinforced after two weeks. Patient was very closely monitored for cervical length and integrity of the stitch.

After a few days, she visited the hospital on 15 weeks by gestation with complaints of abdominal pain and vaginal bleeding. She was again kept on conservative management but this time she started leaking from one of the sacs. She had severe pain which leads to the tearing of the stitch and expulsion of twin 1.

Hence, ultra-sonography (USG) was performed to examine the growth of the twins and the amount of liquor. USG revealed that one of the fetuses (twin 1, lower fetus) was showing no movements and heart activity and confirmed the demise. It was lying outside the uterus. The second twin was normal and doing well. This was disheartening and devastating for her entire family.

Dr. Anu Vij, Consultant, Obstetrician and Gynecologist at Motherhood Hospital said, “After discussing with the family, it was decided that we remove the dead twin and wait and watch for 24 hours for further uterine activity. The uterus was quiet after the first twin was expelled and USG showed that the second twin was doing well inside. So, the decision to put the cervical stitch again was taken. Patient continued the pregnancy till 25 weeks 6 days, after which she gave birth to a preemie weighing 840 grams and was shifted to NICU for further care.”

Dr. Vij further said, “Twin pregnancies are at high risk and often complicated by problems related to the placentation, maternal age, medical problems and obstetric complications, and concerns about the growth of the twins. Death of one twin before birth leaves a survivor at high risk. The survivor twin can even suffer from cerebral palsy or any other brain impairments. Hence, we had to take extra care to save the baby living inside the mother’s abdomen.”

Dr. Vij added, “During the hospital stay, the mother was trained for Kangaroo care that is baby’s care within the first few days after stabilization. Baby is kept on the mother’s chest for skin to skin contact.”
Mrs. Priti Iyer says, “We want to thank the hospital and the doctors for giving my baby and me, a new lease of life. My baby was saved and is hale and hearty due to their dedicated efforts. I am a proud mother now, and I am glad that my baby narrowly escaped death, and we will now be able to live life the way we have always dreamt of.”