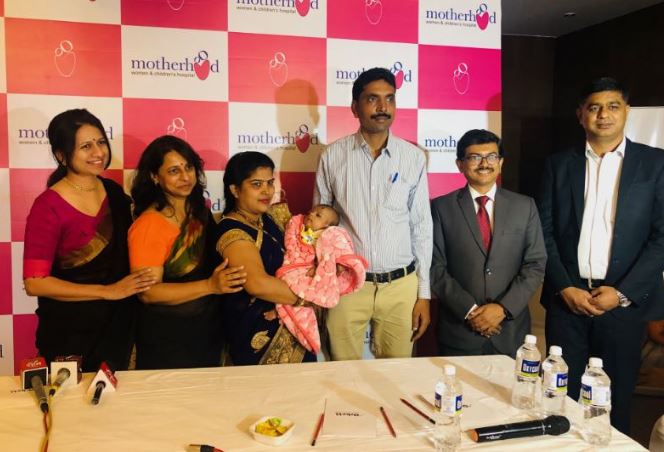 Motherhood Hospital, Kharadi, helps a Pune couple to celebrate parenthood after 18 years, with 8 failed attempts, a high risk and a complex pregnancy.
Mrs. Anita Tripathi and Mr. Virendra Tripathi, from Pune, had a tough time coping with 4 miscarriages and 4 newborn deaths in 18 years of trying for a baby. Anita lost her first baby in the year 2002, after which she kept on losing her baby after every 2 years. Even after consulting various doctors in Pune and Delhi, nothing worked in the couple’s favor. Though her pregnancy reports were normal, the baby wouldn’t survive. However, the couple didn’t lose hope. Each one was of great moral support to the other in the period of trials and tribulations. Finally, their prayers were heard when Anita become pregnant in June 2018. Since her pregnancy was high risk and complicated, she was referred to specialists at Motherhood Hospital at 7 months (28 weeks) of her pregnancy after she suddenly broke her waters. This happened in January 2019. The patient was given medications to ensure fetal brain protection and lung maturity along with antibiotics to keep infection at bay. Medications were also given to temporarily halt the imminent delivery. On the 11th of January 2019, Anita gave birth to a premature baby boy weighing 1.3 kg.
Dr. Rajeshwari Pawar, Senior Consultant Obstetrician and Maternal-Fetal Medicine expert at Motherhood Hospital, Kharadi, Pune, said, “The aim was to pull on the pregnancy in utero as much as possible because there is ‘no incubator in the world as good as the womb’. However, care was taken to curb the chances of infection and complications to the baby in view of absent of bag of waters covering the fetus. The patient had to be delivered at 30th week when there were hints of baby being in danger in the womb.”
Dr. Sachin Bhise, Consultant Neonatologist at Motherhood Hospital, Kharadi, Pune, highlighted, ”After birth, the baby had trouble in breathing, and required immediate breathing support in the delivery room. The baby was shifted to the Neonatal ICU and given respiratory support with an advanced technique of a non-invasive ventilator. He was also given preventive measures to keep sepsis away and was provided nutritional support in the form Total Parental Nutrition.”

In NICU, the baby underwent screening for metabolic diseases in view of the mother’s previous newborn deaths and screening to look for retinopathy of prematurity along with echocardiography and ultrasonography of brain, kidney and liver for congenital anomalies. During her hospital stay, the mother was trained for Kangaroo care, feeding, and hygienic care of baby. The baby weighed 1.7 kg at 1 month and was declared fit to go home.
Dr. Tushar Parikh, Chief Neonatologist and In-charge of NICU at Motherhood Hospital, Kharadi, Pune, says, “India accounts for 24% of world’s premature deliveries and 40% of low birth weight babies. Unfortunately, India also accounts for more than 80% of total newborn deaths among low birth weight and premature babies. This baby’s case is a perfect example of how we can save extreme premature babies if they come to Tertiary Perinatal Centre well in time. There is a need to create awareness amongst people at large that if premature babies receive a timely treatment then they can be saved and lead a normal life. The follow-up of this baby suggest that baby is developmentally normal, accepting breast feeds and is gaining weight well.”
Anita Tripathi, Baby Rudransh’s mother said, “Motherhood is an experience unlike other and is the best feeling in the world. I was devastated after 8 failed pregnancies. When I was pregnant for the 9th time, there was a question mark about baby’s survival. I would panic and constantly ask the doctor whether the baby is fine. But my joy knew no bounds when I heard my baby’s cry for the first time. This was what we were waiting for 18 long years. We are happy that we could fulfill the dream of parental bliss. Rudransh is 4-months old and is fine now. We have been asked to maintain a good hygiene at home, to prevent him from infections.”
Mr. Virendra Tripathi shared his happiness by quoting, “We had to wait for 18 years, but our family is complete now. The doctors at the hospital cooperated well and I am thankful to them for their limitless efforts.”