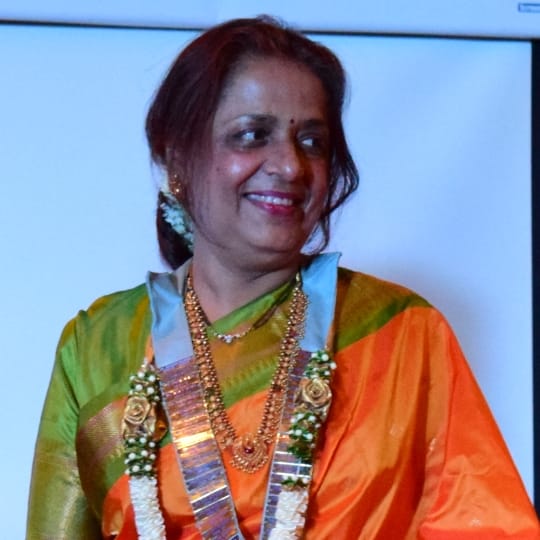 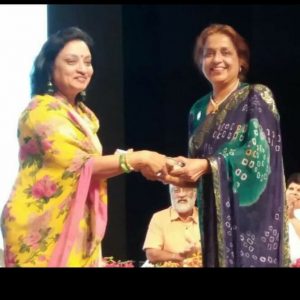 She was born in Belgaum, Karnataka. Father Shri Prabhakar Kale was a police commissioner in Maharashtra. He was bestowed with the President’s gold medal for excellent service. Mother Smt. Sheela was a homemaker. Twin brother Dr. Arunkumar is practicing in Solapur.
I graduated in science, securing the THIRD RANK WITH DISTINCTION from Shivaji University Kolhapur. I was elected as ’ BEST OUTGOING STUDENT’ from Sangmeshwar college Solapur.
Married to RTN. Mohan Goudar Director of BDK group of COS and Sr. consultant of Weir BDK Valves.
They are blessed with son Mithun Goudar, who after completing his BCA is now in the fitness industry in Mumbai. Daughter-in-law Niharika Goudar, M-pharm graduate working in pharmaceutical MNC.

She has been serving the Inner Wheel Club of Hubli Midtown since 1990. Held various posts at club level in capacities of ISO, Treasurer, Joint Secretary, Vice President and served as president in the year 2002-03. During my tenure as presidentship 107 projects were done and won 7 district awards. Our club was also selected as ‘BEST BIG CLUB’ of district 317 for its outstanding overall performance.
At the district level, she was offered the post of “CHAIRMAN FOR THE UPLIFTMENT OF GIRL CHILD AND WOMEN EMPOWERMENT” for the years 2010-11. She was extremely successful in inspiring the presidents of various clubs to carry out a maximum number of projects. The feedback report received from the district chairman was quite encouraging and was awarded the Certificate of Merit.
She was District “ASSEMBLY SECRETARY” in 2005-06 and “UTSAV- RALLY SECRETARY” IN 2008-09. Attended district conferences at Goa, Belgaum, Kolhapur, Triennial Conference at Hyderabad, and institute of training for district officers at Anand Gujarat. During my president-ship district conference, SIDDHA was hosted at Hubli.
At the district level, worked as District ISO, District Secretary, District Treasurer, District Polio plus Chairman, District vice-chairman. served our district as DISTRICT CHAIRMAN IN the YEAR 2017-18.

Further, many good and outstanding projects were undertaken, few of them which were highly appreciated at the association level were
Feeding room for babies “HIRKANI” was built at Sambhaji Bus Stand Kolhapur, by IWC Kolhapur.
IWC Belgaum organized a TRAINING PROGRAM “ASHRAYA- ASTITVA” for women to become caretakers to the ailing and elderly people. The training was undertaken by doctors and nurses of KLE. Certificates were given to the participants as “AGE HELPERS”.
In village Dattawad near Ichalkaranji, 400 people died of jaundice. WATER PURIFIER worth Rs 5 lakh was installed and 12000 villagers are benefited.
Maximum number of VENDING MACHINES and INCINERATORS were installed in school colleges and ladies hostels
Forty-seven government schools were turned into “HAPPY SCHOOLS” with all basic facilities for children.
Many teacher training programs and literacy programs for elderly people were held and certificates were given to them, which were highly appreciated by Rotary international.
“ PRAFULLA DAHANUKAR FOUNDATION” had organized a drawing competition which was open for all children. There were 11 winners from their district including gold and silver Medals. She was honored to share the stage during prize distribution at Panjim, with Goa ex-Chief Minister Shri. Pratap Singh Rane who was the chief guest and Her Highness Shubhada Raje Bhosale from Sawantwadi was guest of honor. And was felicitated by Shubhada Ji which was the happiest moment of my life
Many projects for disabled people were done by providing them with walkers, wheelchairs, and artificial limbs. Projects were undertaken for special children, Orphan children, Deaf and Dumb children, old age home inmates, cancer and AIDS patients. Arranged marvelous district functions like Assembly of “MALLIGE” at Hubli, ISO and editor’s meet “JAI-JUI” at Ichalkaranji, “Rally Of Roses” at Panjim, and conference “BAHAAR” at Belgaum. More than 400 delegates graced these functions.

Penned many poems and articles at the club and district level. The poem “KARO NETRADAN” won the first prize at the district level and many articles were appreciated by one and all. Won many prizes in Dramas, Singing and dancing competitions at the college level.
My hobbies are knitting crochet, Cooking, Gardening, Reading and writing articles and poems, traveling, and making friends.
Traveled extensively abroad, visited the USA, Canada, Europe, and Singapore.

On the current pandemic situation, she says, “The Invisible Enemy Covid 19 has swept the world like a Tsunami. It has restricted each one’s life. To bring the worst situation under control, Without any hesitation, there must be aggressive measures for Covid testing, Contact tracing, Isolation, Vaccination drive more rigorously, providing beds with oxygen, ventilators, and medicines. Follow the Lockdown rules seriously, Ban social gatherings completely, Stop black marketing of Medicines Oxygen Cylinders and hospital beds. Be Safe, Be Smart, Be Kind. In the coming year let us altogether Build a Fairer, More Inclusive, and Sustainable Society. Stay together physically apart.”