Female Social  entrepreneurship is vital for our future. Collectively we can make a change by closing the gap between men and women in the workforce.
Social entrepreneurs are those adventurous, daredevils who drive deep into the pressing problems of society and try to find solutions to them, not by leaving the responsibilities in the reins of the government or business, but by trying to change systems as a whole and persuading societies to take new initiatives.

Social entrepreneurs are making a tangible difference to imprison the lives and economic prospects of India’s most needy people and Communities. Over the last decade Gurugram known as IT hub of North India  has seen several positive changes within its society and one of the most exciting is the rise of women Social entrepreneurs. 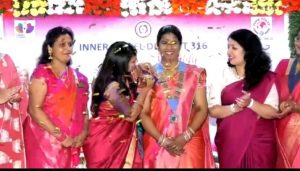 Jyothi Laxman
District Chairman / Deputy AC Member 2021-22 Dist 316
Every member of Inner wheel aspires to become chairman for a reason. She is very glad that she got an opportunity to serve in this place.Got inducted and joined Inner Wheel in the year 2000-01 with the motivation of PDC Mrs. Anuradha Manjunath as a member, She served as Editor, ISO, Joint Secretary and became Secretary to PDC Mrs. Shyamala Shivaprakash and served as President in the year 2007-08 at club level under the Chairmanship of Mrs PDC Anuradha Manjunath. She enjoyed every single post. She served and was also awarded as “Best Secretary”and Öut Standing Best President”for her work. She was the Rally Chairman, Assembly Chairman and also Conference Chairman.
In this Journey she mentions PDC Mrs. Bhagya Murthy for all her helps & she tells that she is her go to person for every issue she faces.
Her service journey continued and she entered Dist. EC in the year 2015 16 with the supportof PDC Mrs.VeenaSwamyas ISO,and has served as Dist. Editor, Dist. ESO, Dist. Secretary, Dist. Vice-Chairman. And now she will be leading the Dist. 316 as a Dist. Chairman for the year 2021-22. 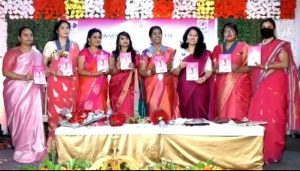 She was also president in Vasavi Mahila Sangha, Chitradurga for the year 2010 to 2012 and has done tremendous programs like “Blind Children Concert”, “Laksha Deepothsava”, “Mega Hosie”, are a few from the list. Not just the above she was also part of many other organizations. Recognising her service sector she has been honoured with various awards.
Being an aspirant person, her thrust for serving has made her to serve as a founder for a dance school “GLOGLIT” for years and presently she and her husband have opened, “Shanthinikethana”which can be called as a joyfull gathering for senior citizens, initially supported by Redbulls Team (Started with 20 members-now reached 100 members and above).
She has a passion towards spirituality. She loves cooking, reading books, playing Veena, Listening Music. “Be good and do Good”is the motto of her life “Simplicity and being oneself”is the biggest weapon of her life.

One of the most important District of Inner Wheel in South India which covers big cities and districts of Karnataka such as Bellary, Koppal, Kadapa, Hospet, Chitradurga, Vidyanagar , Gulbarga ,Anantapur, Nellor, and Kurnool of Andhra Pradesh. This District performed well during this difficult time of pandemic and majority of the clubs came forward to support pandemic affected people.