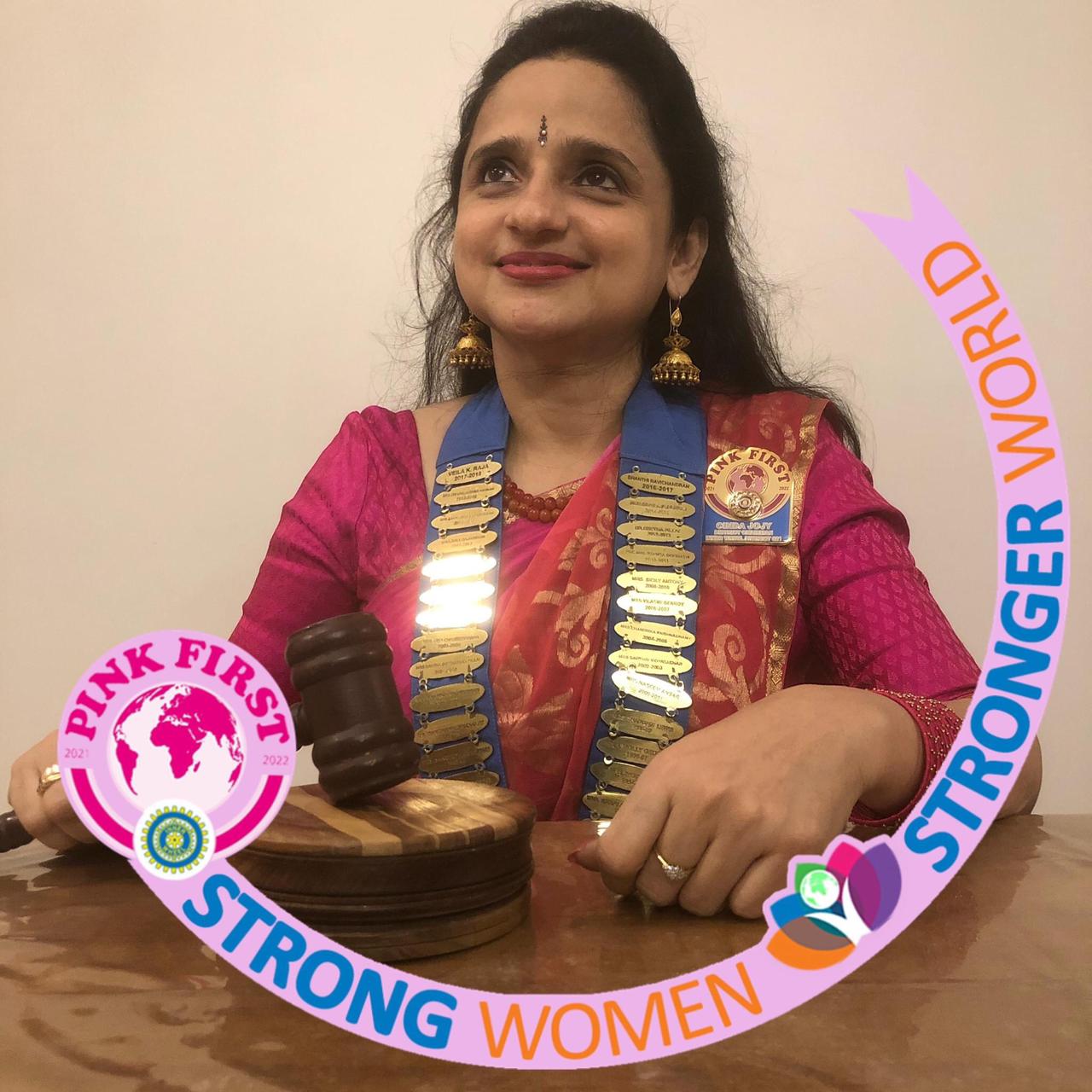 Women Social  entrepreneurs and business are leaving their mark on the world. By creating successful companies, they are contributing to the betterment of the economy. Female entrepreneurship is vital for our future. Collectively we can make a change by closing the gap between men and women in the workforce.

Hello Womeniya. Com  always has a very special corner for the women, and the news portals  is working towards the women-empowerment right from the inception. Hello Womeniya’s main objective is to promote women entrepreneurs and create their digital identity on  online platform.  The woman plays a very important role in our society, she is a housewife, a mother, a friend, a colleague for a long time, and now she also plays the role of businesswoman, entrepreneur and politician. Women have started spreading their wings and there is nothing that can stop them now.

In our Inner wheel Social entrepreneur series in this episode we are introducing you a very dynamic and and popular social Entrepreneur of Inner wheel who firmly believes in Social service and charity work yes we are talking about Cinda Jojy who is District Chairman of IW 321..She shared her  Inner wheel Journey with Hello Womeniya Correspondent Ruchika Sawant.

HISTORY of INNER WHEEL DISTRICT 321
District 320 was the fifth Inner Wheel District to be formed in India, in the year 1970 comprising of 15 Inner Wheel Clubs, of Kerala, Tamil Nadu and Sri Lanka with Mrs.Seetha Rajamony of IWC of Trivandrum as the first District Chairman. IWC of Madras South was the first club to be formed in South India, in1963, with Mrs Annapoorani Veerappan as the founder & Charter President, (We can be proud that she is the mother of our PDC Lakshmi Periyannan) followed by IWC of Trivandrum. (IWC of Madras South is in fact the second club to be formed in India, after IWC of Ahemedabad)
Inner Wheel club of Trivandrum (nondistricted), was formed on 16th Nov 1966 with Mrs.Zubieda Marikar as the Charter President, followed by Inner Wheel Club of Quilon on 18th November 1966, with Mrs. Mariamma Poulose as the Charter President. At the time of formation, the clubs belonged directly to the National Council of Inner Wheel in India. In the Sri Lankan region, IWC of Colombo had been formed on 15th July 1965 and IWC of Colombo west on 1st August 1966. Many clubs were formed after this and became part of District 320.
In July 1974, Dist.320 was bifurcated into Dist.320 & Dist 321 in tune with the boundaries of Rotary Districts. The clubs in the Southern part of Kerala, Tamil Nadu and Sri Lanka formed the new Dist.321, with11 clubs, 5 in Kerala, 2 in Tamil Nadu and 4 in Srilanka [then Ceylon]. They were the Inner Wheel clubs of Alleppy, Colombo, Colombo West, Kandy, Kottayam, Nagercoil, Negombo, Quilon, Tiruchirapalli, Trivandrum, and Trivandrum North. The first Chairman of District 321 was Mrs.Lucille Amarasurya of IWC of Colombo. In Tamil Nadu region of Dist 321, Tiruchirapalli was the first club to be formed in 1974 with Mrs.Saroja Ravichandran as the Charter President. The year 1985 saw a further reorganization, as the 8 Sri Lankan clubs branched off to form the new District 322. In Tamil Nadu as well as in Kerala new clubs were formed year after year. At present District 321 comprises of 46 clubs, 19 in Kerala and 27 in Tamilnadu with a total of 1596 members.

Spread over two states geographically, the District works in perfect harmony, upholding the ideals of Inner Wheel. The District Events are well attended and the cultural activities add to the fun and joy at District meets. Members have held high offices at the Association level. Dr.Mrs.Muriel Sukumaran was our Association President during 1982-83 and Mrs.Vimla Abraham, during 1994-95. Mrs Vimla was also the IIWBD in 1995-96. Infact she is the only Association President who had served both as International Inner wheel Representative and Board Director. She also served as the Association CCCChairman from 2001-04.
We have had three Association Secretaries, Dr.Muriel Sukumaran (1978-79), Mrs.Vimla Abraham (1991-92) and Mrs. Bina Rajasingh (2012-13) and two Association Treasurers, Mrs. Kusum Palicha (1984-85) and Mrs Remani George (1994-95) from our District.
Two Triennial Conferences, one in Feb 1983, at Trivandrum during the Presidentship of PAP Dr.Muriel Sukumaran and another at Cochin in Feb 1995, during the Presidentship of PAP Vimla Abraham were hosted by us. Our district also hosted the ICI-Incoming Chairman’s Institute in Kottayam in 1991 during the Chairmanship of PIIWBD Vimla Abraham, and one in Kodaikanal in 1993 during the Chairmanship of PDC Kamala Manimozhiyan. With the formation of new Clubs District 321 is expanding year by year.

In 2007 -8 she started her Inner wheel journey, and in 2012-13, led IWC of Alleppy as the club President, bagging the Award for the outstanding president. During her tenure as the Club President she conducted a mega sale – shoppers Dhamaka collecting a huge profit which was used to build a toilet block for a school in Alleppey and conducted a mega cancer detection camp and forming an Inner Wheel Scholarship.
She entered the District as district editor in 2015- 16, as editor the District souvenir, was completely designed and edited by herself. And step-by-step she climbed the ladder and presently is the District Chairman of Inner Wheel District 321.

She is a lover of nature and a creative artist loves who loves  painting,Embroidery,reading,designing and lower arrangement. During the International Inner wheel convention held at Turkey in 2012 her painting on the theme ‘Inner Wheel without Borders “was selected to be auctioned there and the proceedings from it was used to build a school in the earthquake affected areas of Van in Turkey. She also got the third prize in the painting competition held at the triennial conference at Hyderabad, and several other prizes invarious interclub & interdistrict competitions.
She believes that Inner Wheel has helped to develop & better herself as a person, and given her such lovely friends worldwide. She to lend a helping hand to the society, especially women and children and the protection of mother earth for the generations to come.
“Her motto is; Do your best and hope for the best”

On  July 1st the first day of my tenure along with doctors day we were able to conduct many projects especially related to honouring the Covid warriors, kitchen gardening and awareness presentation of the hazards of tobacco in schools.
All the clubs recognised Covid warriors the doctors and nurses of the locality and within Clubs.
Power Point presentation on the hazards of tobacco and awareness classes about it was given in schools .
All 1601 members of the District, started off their very own kitchen garden. Though many started with a few grow bags expansion is in mind.
We are given a set of goals from the Association SHEROES and we have our own set of District goals CREW.

To start the new year we had a week long training session C’IKSHA for the incoming club officers.