The Logo and identity of the Delphic Council of Maharashtra symbolises “WATER” as metaphor of Peace through the arts, as exemplified by the Delphic Games from the ancient times.

The International Delphic Movement is a non-government, non-profit, non-political, non-sectarian, non-religious organisation. It is the only such platform in the world to nurture and promote Arts and Cultures as a means to peace and harmony amongst peoples and races. 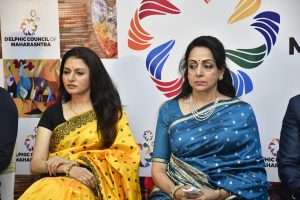 Picture of Hema Malini and Bhagya Shree during the event

The Delphic Games are only-of-a-kind, global common floor for the dialogue of arts and encounter of cultures. They are organised around the world every 4 years by the International Delphic Council based in Berlin and have travelled to 8 countries and counting. They represent six major Arts categories – Musical Arts and Sounds, Performing Arts, Language Arts, Visual Arts, Social Arts and Ecological Arts & Architecture with hundreds of sub-categories and genres and give a platform for artists across art forms, art lovers and various stakeholders.

Commenting on the launch, the Hon’ble Governor of Maharashtra, Bhagat Singh Koshyari said, “Maharashtra has a rich heritage of arts and culture. The Delphic Movement & the State Council of Delphic Maharashtra bring a prestigious platform to further encourage and grow this heritage. I congratulate them and wish them all the best in their endeavours.”BJP MP Hema Malini, while speaking on the occasion said, “The world has been in the throes of despair with the pandemic since last year and it was a time that reinforced the importance of arts & culture in our lives. The need to have something that touches our hearts and soul and gives us respite, the need to have words, expressions and more that instil hope and inspire. We have immense talent in India, and under the aegis of the Delphic Movement, I hope to be able to bring this talent to the forefront for the whole world as we did in the case of Yoga.” She thanked the Indian Delphic Council for honouring her as the National Delphic Ambassador for Classical Performing Arts. She also congratulated the Delphic Council of Maharashtra and the Indian Delphic Council for their efforts to celebrate our arts, cultures and artists across the world.

Commenting on this development, Mr. Bijender Goel, Founding President, Indian Delphic Council and Advisor for the South Asian region, International Delphic Council sent in a message saying “International Delphic Council offers a common floor to Artists and to all Cultures. The Delphic Movement is getting overwhelming support from across the spectrum, and we plan to take the Delphic Movement to every artist, art lover, stakeholder, Government and Non-Governmental bodies in India. We are currently in 22 states in India & growing. We will focus on multiple mediums, forums, platforms, and common floors to nurture an artistic ecosystem across various age categories in India and will closely work with State Councils and National Arts Federations to ensure we reach out to everyone. The Delphic Council of Maharashtra has started very well in this direction and my best wishes for their endeavours!”

Commenting on the formal launch, Mr. Sahil Seth, IRS, President, Delphic Council of Maharashtra said, “It is an honour and matter of pride to be associated with the Delphic movement in India & encourage the growth of art and culture as a medium to not just bring people together but also enable global opportunities for the state and its people. Maharashtra has a rich heritage of arts & culture that are seen across the country today and with the Delphic Movement, we hope to create a life-long continuing impact on society. We are accompanied by an eclectic mix of Delphians in our Executive Board, Advisory Board & Committees and will soon be announcing our first set of initiatives that feature art for children, a short film festival and a lot more.”

Actor and BJP MP Hema Malini with Yash Birla during the event.

The International Delphic Movement is a non-government, non-profit, non-political, non-sectarian, non-religious organisation. It is the only such platform in the world to nurture and promote Arts and Cultures as a means to peace and harmony amongst peoples and races. The Delphic Games were born in ancient Greece 2500 years ago as the twin-sister of the Olympic Games. They are to Arts & Cultures what Olympic Games are to physical sports. In the past, India has participated in 3 editions of the Delphic Games in various countries and bagged gold and silver medals in South Korea and Malaysia.

The International Delphic Council is a voluntary, not-for-profit, non-political, non-religious, non-sectarian global movement for arts & cultures; with the aim of fostering engagements in the various arts forms amongst people of different races and cultures through the world’s only common floor for the arts called the Delphic Games.

Since revival, the Delphic Games have been hosted in Georgia, Russia, Malaysia, South Korea, Philippines, Germany, and South Africa while other festivals of cultural significance have been organised elsewhere in the world. International Institutions like UNESCO, Council of Europe, ASEAN, and such, have endorsed the various editions of the Delphic Games at various times.