Starlet Actress Rekha Rana starring in ‘Tara’ alongside Actor Rohan Shroff in leading roles has received accolades across the globe. The movie is Produced & directed by Kumar Raj .

Rekha Rana, from an early age had a keen interest in theatre and was passionate about acting. She also participated in many plays. Actress Rekha Rana began her movie career after she won the Best Actress Award for her performance in the short film ‘Take Care’ at Rangs Singapore film festival in 2010 which proved to be a big break for her.

Her work for humanitarian projects such as education in India has led to her being the World Ambassador for ‘Heart for India Foundation’ founded by Princess Francoise Sturdza, and also she has been supporting and working with UNICEF, alongside. 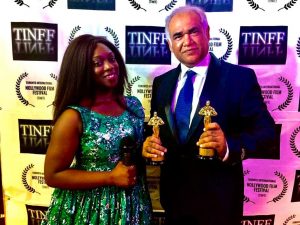 The film director Kumar Raj is overwhelmed with the response of audiences Pan India as well as Internationally as it’s his proud moment to achieve this feat. Director-Producer Kumar Raj is well known in the Bollywood film industry for his feature films. His feature films such as ‘Yahan Ameena Bikti Hai’ and ‘Tara: The Journey of Love and Passion’ were selected for the ‘Best Foreign Film Language’ category at the Oscars .

Kumar Raj is a Master Mariner from Cambridge UK by profession and Film Producer and Director by choice. He has completed a diploma in production from ZIMA ( Zee Institute of Media Arts). For his extreme passion and love for cinema, he has produced 5 feature films which have been appreciated for its exceptional performances.

Those have also won many prestigious awards and caught the eye of the Oscars for ‘The Best Film Foreign Language’ category. ‘Tara: The Journey of Love and Passion’ starring Actress Rekha Rana has portrayed her role in the movie flamboyantly, which has received 237 international awards and was selected in 337 International film festivals worldwide and it was also selected for the Oscars from West Africa. ‘Yahan Ameena Bikti Hai’ is a hard-hitting, woman-oriented movie based on problems of women in rural and backward areas. This film is selected for the Oscars from the country “Cameroon” under ‘Best Feature Film in Foreign Language’ category for the 89th Academy awards .
The next feature film Kumar Raj has produced & Directed is Ameena starring Rekha Rana which will be released soon .