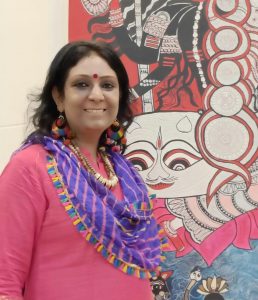 Hello Womeniya. Entreprenuer Desk :Female entrepreneurship is vital for our future. Collectively we can make a change by closing the gap between men and women in the workforce.
entrepreneurs are those adventurous, daredevils who drive deep into the pressing problems of society and try to find solutions to them, not by leaving the responsibilities in the reins of the government or business, but by trying to change systems as a whole and persuading societies to take new initiatives

In our Entrepreneur series today We are introducing you a very dynamic and popular Entrepreneur of Delhi and Founder of Madhubani Art Centre  who organised many art exihibition worldwide for her remarkable and outstanding performance in the field of Art and painting she honoured with National award yes we are talking about Manisha Jha .who always belives in Women Empowerment Arts and to promote  Mithila  painting  is passion for her.

Manisha Jha, artist (National awardee) in Mithila paintings, architect, interior designer, planner and author. She established Madhubani art center, in New- Delhi in the year 1998, and is collector of more than 3000 Madhubani paintings from 1970- till today.
Author of two Books on Mithila paintings titled, “Likhiya” and Mithila paintings depicting Madhushravni-the monsoon festival of Bihar published by Indira Gandhi national center for the arts, New Delhi, and Madhubani art center, respectively. She has also illustrated a book titled “Paltu and Gharelu” published by room to read. She has worked with several multinational companies like Godfrey Philips, Nestle, peter England, General electrics, USA, BBDO Asia and many more.
she has had more than 150 exhibitions and workshops on Mithila paintings in India and in countries like USA, Mauritius, France, Canada, Vienna, Austria, Australia and Belgium. Her works are in Permanent collection of Indira Gandhi national center for the arts, Essl. Museum Austria, Albertina museum Vienna, International Folk Art Market USA and several private collectors all over the world. She is actively working with more than 500 women artists from different villages of Madhubani district in Bihar.