It was a pride moment for the entire Goel Family when Entrepreneur Neeti Goel was Honoured with “Iconic Women Entrepreneur” Award At the Mumbai Achievers Awards Star-studded Night. It is a little wonder if Neeti Goel would tread the path of her forefathers, and, in hers own words, “learn to spell entrepreneur faster than anything else!”

Neeti Goel hailing from Chandigarh is the daughter of well -known industrialist late Mr. S.K. Gupta.
She is a successful restaurateur based in Mumbai with ‘Keiba’ ‘Ostaad’ ‘Madras Diaries’ ‘ Madras Express’  and the brand villa amore having premium staycations in alibagh.
She has been awarded the restaurateur of the year in 2019 at the Eiffel Tower in Paris & has ranked 2nd ¹amongst the top 50 restaurants in the world.

During the pandemic Neeti has taken up a lot of relief work by co-founding the ‘Ghar Bhejo’ initiative with actor Sonu Sood, where they transported more than 2 lacs migrant workers back home and ‘Khaanachaiye’ which started with 1200 meals and are at 80 lakh plus meals now.

Adopting 282 shramik trains, adopting stray dogs & cats, providing 50000 ration kits to families, serving meals in the Mumbai control room & Fire department, providing relief to Rambo circus group as well as sex workers are amongst many of her contributions towards society.
She set up relief camps at Thane, Vashi, Dahisar, Nasik highway, which catered to 2.5 lakh migrants walking home. The list continues with many more initiatives such as cyclone relief work which benefited 70000 people & rescuing stranded students in India & in Krygstan to bring them back home on charter flights. Neeti undertook the Sanitary pad distribution drive where 50000 sanitary napkins were distributed to sex workers, women in migrant camps, women prisoners in Thane and Byculla jails, 32 orphanages and other needy women.
During the second lockdown the relief efforts continued with emergency ambulance service providing mobile oxygen at Dororstep , cooked meals , ration kits and other daily essentials .
And the work Still goes on. 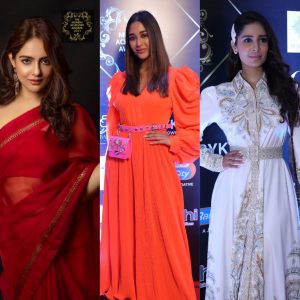 The MUMBAI ACHIEVERS AWARDS, is an award function known for their focus on creativity philanthropy and glamorous. Not only did they pass with flying colors in their area of expertise but also peaked the bar of entertainment and glitz.

Renowned Celebrities have graced the occasion with their presence and made their walked through the Red Carpet to attend the event,

Actor Sonu Sood Say’s he is “highly honoured to be conferred with this prestigious award & gives his best wishes enitre team of the Mumbai Achievers award.

According to The Mumbai Achievers Awards Jury panel has decided to honour the following personalities from different professions and fields.