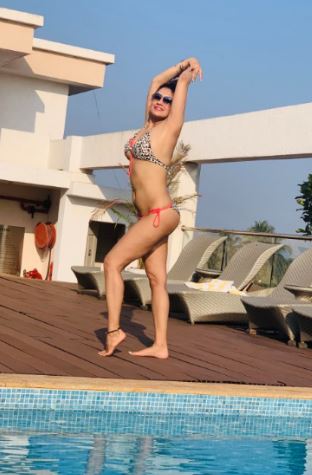 Actress Gurlen Siingh Chopraa, did a scintillating photoshoot in a two-piece bikini. Before she could realise, her pictures became a hot topic quite literally, and went viral on the internet. In each Picture she has A HOT AND SEXY AVTAR.

Talking about the same, the actress says, “I am a very fitness conscious person and have always been very comfortable with my body. I had never really done a full-fledged photoshoot wearing a bikini, so I thought of doing one this summer.

I posted the pictures on Instagram and while I was comfortable doing the photoshoot, I was not sure how people would react to it as they had never really seen me in this kind of an avatar. To my surprise, the pictures went viral, one after another. My timeline has been bombarded with likes and comments and I could not have been happier.”

Gurleen posted three pictures on her Instagram account. In the pictures, one can clearly see that the actress adheres to a very healthy lifestyle which explains her toned physique.

Gurleen quoted, “For me, fitness is a way of life. Of course, in today’s date and age, an actor is required to be fit and look hot all the time but even before I became an actress being fit was a mantra I religiously followed. I think it is important to be healthy both mentally and physically.”

So this is how Gurleen didn’t expected so much love from fans on her new avtar and is overwhlemed by the response of fans she got. Looking at the hugely positive response from fans at her new look pictures, Gurleen plans to do another photoshoot very soon. So her fans stay tuned for more such pictures.