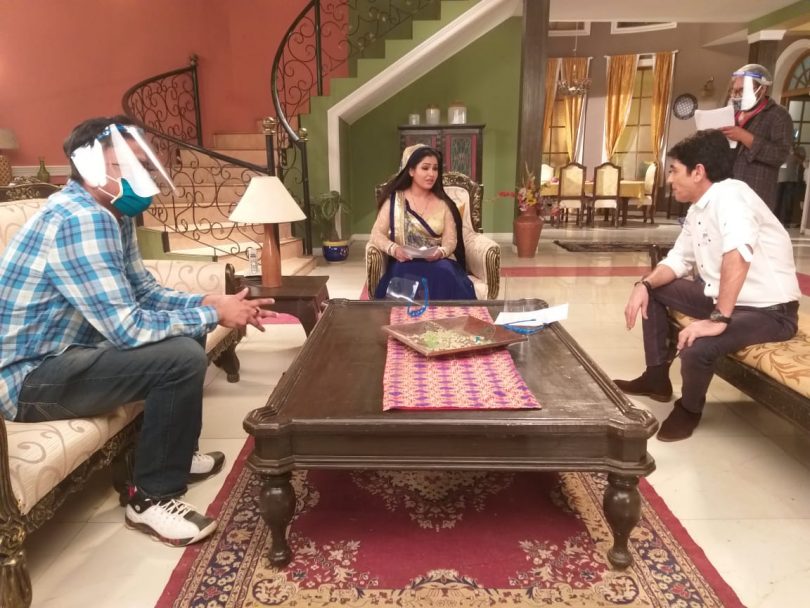 &TV resumes shoot for the popular cult show Bhabi Ji Ghar Par Hai! Yet again taking the audience on a joyride of laughter, the Mishras and Tiwaris have returned to the modern colony, all excited and prepared. Shoot is resuming with limited crew and taking utmost safety and sanitation measures.

Speaking about his first day at the shoot, Aasif Sheikh, the Vibhuti Narayan of Bhabi Ji Ghar Par Hai! said, “It felt good to be on sets after such a long gap. I had been waiting so long for the shoots to start and atlast I am glad to be back on the set. We all met and greeted each other with distant hellos and namastes, keeping SOCIAL DISTANCING NORMS in mind. On reaching the set, our body temperature and oxygen levels are monitored. We all were handed face shields and masks which we took off only while facing the camera. The day started with a small Ganapati Ji’s Aarti followed by getting into our character look. All of us took the utmost care to abide by the safety and sanitation guidelines and followed social distancing at all times.”

Shubhangi Atre aka Angoori Bhabi of Bhabi Ji Ghar Par Hai! shares, “I am excited to be back on the sets and looking forward to our show to be back with fresh episodes as well really soon. Earlier our set used to be buzzing with technicians, spot dadas and the rest of the crew every morning but now with limited people, the modern colony looks very different. After clearing the sanitation and screening process, we all assembled for a short Ganesh Aarti for an auspicious start, followed by rehearsals wearing masks. As I live nearby, I did my own makeup and wore my costume to the set for minimal touch-ups. Also, we are limiting our group lunches and resorting to individual breaks to avoid gathering. The entire experience is quite different, but with time, we all will get used to it.”

Rohitashv Gour aka Manmohan Tiwari of Bhabi Ji Ghar Par Hai! Shares, “When I was informed that the shoots are resuming, I was on CLOUD NINE. I have never been on such a long break in my career and, I missed shooting big time! I was so happy to see everyone. The day started with mandatory screening and sanitation on arrival, followed by a small Ganpati Bappa’s Aarti and then prepping up for the shoot. After this, I immediately started shooting once my makeup and character look was done. It was such a surreal feeling. At the same, we ensured that we continued wearing masks after every shot, sanitized our hands at regular intervals and maintained social distancing. I am excited about the new episodes, and I am sure the viewers too are looking forward to their favorite show making a comeback with all brand new episodes really soon!”

This is how the star cast of the show shares their excitement of being back on sets and resuming the shoot is a delight for all. Catch all the exciting and fascinating new episodes of Bhabi Ji Ghar Par Hai! Coming soon only on &TV.