Over the years, Shabina Khan has given audiences some of the most iconic songs and dance moves which are now labelled as her signature moves. Now, she has made Amitabh Bachchan, Anupam Kher, Boman Irani, Danny Denzongpa shake a leg in the much anticipated first song Ketiko Ketiko from the film Uunchai.

Ketiko Ketiko was scheduled to release later,  however on public demand the makers of the film decided to release it as the first song on the 22nd of October, 2022 “ I am on cloud nine. Working with legendary director & actors is a privilege” says Shabina

“The trailer of Uunchai shows only a small glimpse of the song Ketiko Ketiko but those few seconds were enough for the audience to get attached to the characters and their friendship. It is a dream for any choreographer to choreograph legends like Amitabh Bachchan, Anupam Kher, Boman Irani, Danny Denzongpa” says the star choreographer Shabina Khan. In every field of creative endeavor we come across an individual that raises the bar to an ultimate peak for that particular field of artistic achievement. In the arena of dance gurus, we have our very own queen of choreography- Shabina Khan who has been a “constant hitmaker” to a bunch of A listers like from Salman Khan, Sunny Deol, Sanjay Dutt to now Amitabh Bachchan.

Shabina who has choreographed multiple chartbuster songs in blockbuster films feels that dance is an integral part of a song, however the choreographer believes in following the director’s vision in terms of storytelling, characterization and appropriate choreography & understanding the audience. 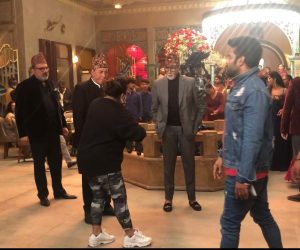 Releasing on 11th November, the story of the film revolves around Amitabh, Boman, and Anupam fulfilling their friend Danny’s last wish to summit Mount Everest as an ode to true friendship and courage.